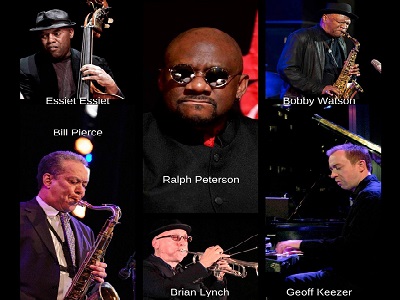 Anyone who even vaguely follows and/or garnered appreciation for “Hard-Bop,” the soulful jazz sub-genre that in the mid-1950s followed on the heels of bebop, fully understands the historical significance of drummer Art Blakey & The Jazz Messengers. Blakey led the Jazz Messengers for 35 years, from 1955 to 1990, the year he died. The number of significant bandleaders-to-be that entered “The University of Blakey” in their late teens/early 20s and graduated anywhere from two to five years later, numbers in the dozens upon dozens. The Jazz Messengers roster spawned a litany of seminal players, among them: Terence Blanchard, Donald Byrd, Walter Davis Jr., Kenny Dorham, Curtis Fuller, Benny Golson, Benny Green, Johnny Griffin, Donald Harrison, Freddie Hubbard, Wynton Marsalis, Branford Marsalis, Mulgrew Miller, Hank Mobley, Lee Morgan, Woody Shaw, Wayne Shorter, Bobby Timmons,, Cedar Walton, Peter Washington, James Williams and Reggie Workman, to name but a few.
Blakey, who encouraged band members to contribute material to his ensembles, naming many members “Musical Directors,” would have turned 100 on October 11, which makes 2019/2020 his Centennial. Among those participating in the celebration is a multi-generational aggregation of six former Jazz Messengers, each who, not surprisingly, has gone on to become major figures within the present-day jazz arena.
Led by drummer Ralph Peterson, who Blakey chose to be by his side in the Jazz Messengers Two Drummer Big Band, The Messenger Legacy Band recently released a 2-CD set, Legacy Alive (Onyx), and has embarked on a world tour that has already taken them to Australia, China, and both Europe and across the United States twice. “Having multiple generations of Messengers represented in this band, this is the closest you can get to the source,” says Peterson “This is the real deal.”
The Messenger Legacy Band includes tenor saxophonist Bill Pierce (1980-1982 tenure), alto saxophonist Bobby Watson (1977-1981), trumpeter Brian Lynch (1989-1990), pianist Geoffrey Keezer (1989-1990), bassist Essiet Okon Essiet (1989-1990) and Peterson 1983; various)