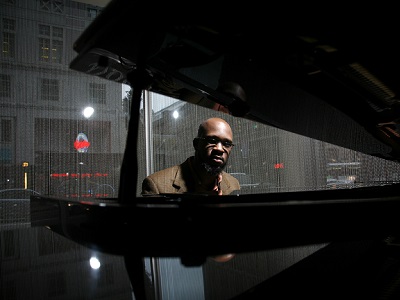 Pianist Orrin Evans first visited the “We Always Swing”® Jazz Series as a member of Bobby Watson’s group. In 2014, he returned as a member of trumpeter Sean Jones’ Quartet; a year later, he contributed to saxophonist Steve Wilson’s quintet. Almost three years ago, he led a 10-piece configuration of his Captain Black Big Band – recently named the “2019 Big Band of the Year” by the Jazz Journalists Association – into the Missouri Theatre, performing a work commissioned by the Metropolitan Museum of Art based on Thomas Hart Benton’s large-scale murals.
His various appearances underscore just how strong and in-demand Evans is – particularly when you take into consideration that more than a year ago, upon Ethan Iverson’s departure from The Bad Plus, members Reid Anderson and Dave King invited Evans to fill the piano chair. That said, we thought it was appropriate to have the Philadelphia native participate in our noteworthy anniversary season by leading a smaller group into Murry’s.
Joining Evans will be a yet-to-be-named horn player of his choosing, along with two long-time rhythm mates, bassist Luques Curtis, no stranger to the Jazz Series, what with previous appearances here with Conrad Herwig’s Latin Side All-Stars and with Eddie Palmieri, and drummer Mark Whitfield Jr., who made his first Jazz Series appearance two years ago and wowed people as a member of Chico Freeman’s 4-Tet.