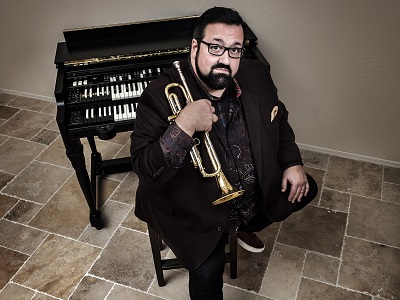 Etienne Charles Creole Soul:
Born in Trinidad, Etienne Charles moved to Florida, graduating from Florida State’s jazz program. Then it was on to New York, and graduating from Julliard before moving to East Lansing to teach trumpet at Michigan State University. Charles has released a number of recordings on his own label; currently, among his many varied projects is serving as a member of the SFJAZZ Collective. The energetic, cross-cultural trumpeter/ percussionist returns to the Jazz Series to open tonight’s proceedings with his band, Creole Soul. “Jazz is Creole music,” Charles has said, happily admitting he’s been influenced by all kinds of music. “My family has a mixed background, with French Caribbean, Spanish and African roots as well as Venezuelan influences. I come from a fusion of rhythms, a fusion of cultures.” No doubt they will fill the air this evening.

Joey DeFrancesco Trio:
As for Joey DeFrancesco who programmatically follows Charles, it’s difficult to digest how much he’s accomplished given he’s still on the young side of 50. One of the world’s finest organ players for some time now, the native Philadelphian and son of organist “Papa” Joe DeFrancesco, played with Miles Davis as a teenager. Three decades later, Van Morrison chose to have him share the bill on You’re Driving Me Crazy (Sony), the release followed by a tour. As for this Jazz Series appearance – DeFrancesco’s fourth – he arrives with saxophonist Troy Roberts and drummer Khary Shaheed, both who frequently work with him and appear throughout the organist’s most recent and adventurous release, In The Key Of The Universe (Mack Avenue), which also features saxophonist Pharoah Sanders.