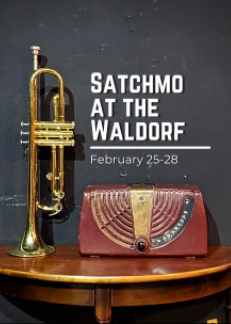 February 25-28, 2021
This production will be presented on stage to a limited audience, and streamed online.

opens in a new windowClick Here for In-Person Tickets

opens in a new windowClick Here for Livestream Tickets

This play features mature language and content related to sexism, racism and drug use.

Summary:
Satchmo at the Waldorf is a one-man, three-character play in which the same actor portrays Louis Armstrong, the greatest of all jazz trumpeters; Joe Glaser, his white manager; and Miles Davis, who admired Armstrong’s playing but disliked his onstage manner. It takes place in 1971 in a dressing room backstage at the Empire Room of New York’s Waldorf-Astoria Hotel, where Armstrong performed in public for the last time four months before his death. Reminiscing into a tape recorder about his life and work, Armstrong seeks to come to terms with his longstanding relationship with Glaser, whom he once loved like a father but now believes to have betrayed him. In alternating scenes, Glaser defends his controversial decision to promote Armstrong’s career (with the help of the Chicago mob) by encouraging him to simplify his musical style, while Davis attacks Armstrong for pandering to white audiences.

Bio:  Born in the West Texas city of Fort Worth, raised by two magnificent women, my momma, Jo Ann, a loving, strong-willed, hard-working career woman, and my Granny, M’Dear, Opal Lee, a school teacher turned Community Organizer and Civil Rights Activist. My ninety-four year-old Granny just recently made national news on her sojourn from Texas to the Nation’s Capital in hopes of making Juneteenth a National Holiday.

Early on, as a boy, I was severely bitten by the music bug. I excelled as a trumpet player, won awards and accolades, and eventually won a spot as a Fine Arts student at the prestigious Howard University in Washington, D.C.

After school, I became a touring musician, getting my start performing with legendary bluesman Johnny Taylor. I eventually signed an artist deal with Chrysalis Records, where I wrote, produced, and performed. I settled in Los Angeles and worked as a Music Producer and Mix Engineer for Universal Publishing, Motown Records, and the legendary songwriter Diane Warren. I turned my attention to acting in 2015 and am now a SAG/AFTRA actor who has worked on shows like Scandal, Bones, and movies like Sharknado 3 and La La Land. My wife, Julie and I transplanted to Columbia in 2018, where I still am performing. I was recently in productions at Talking Horse (Boy), Maplewood Barn (Rumors), and CEC (Dreamgirls).

Now, as an actor pursuing a lifelong dream of performing both stage and screen, it has become more apparent that acting is another happy adventure for me. Yes, the achievement is fulfilling, but I have become much more aware than ever that “Happiness is a journey.”