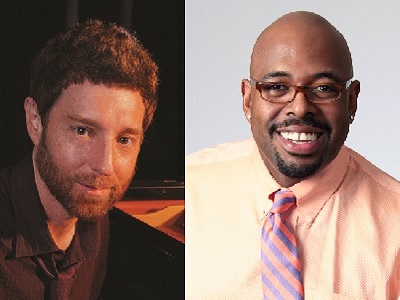 It’s certainly not by accident that we asked bassist extraordinaire Christian McBride and A-Number One pianist Benny Green to pair up and participate in the “We Always Swing”® Jazz Series® 25th Anniversary. In fact, there are so many reasons why this particular musical partnership was high on our list and makes perfect sense.
Consider that McBride and Green, though the former is close to 10 years younger than the latter, came to recognize each other’s brilliance at about the same time, circa 1990 or so. McBride would record with Green at least three times as a member of the pianist trio from 1990-1992; they would repeat the process nearly a decade later in the early 2000s. Their careers have veered apart to some extent; however, they have crisscrossed professionally for close to three decades including on Jazz Series’ stages. In 2007, having been influenced greatly by the Ray Brown, brought them together with drummer Gregory Hutchinson to pay tribute to the late bassist. They arrived here again in 2013, both as members of the larger all-star ensemble, “Monterey Jazz Festival: 55.”
It was not only Brown and others who left their imprint on McBride & Green. Both men recognized the importance of the late James Williams and the impact the pianist had on each of their respective careers. In the case of McBride, Williams all-but took him under his wing, showing him the New York City jazz ropes when he was still a teenager. The two performed duos together as well as playing in larger groups; in 1994, when Williams took his Contemporary Piano Ensemble – a four-piano-plus-base-and-drums group on the road, McBride served the group’s bassist. In Green’s case, Williams’ awareness of and respect for jazz history, spoke directly to Green’s sensibility and aesthetic; in part, taking a cue from Williams, led him to approach the jazz world – though he is a primary part of it – in the same, or similar, manner.
Both McBride & Green – like Williams – are drawn to giving, to passing on the jazz tradition through formal and not-so-formal education, both on and off the bandstand. Because of all these reasons, we asked the two to hold a “reunion concert” – just the two of them – in honor of Williams and jazz education, which has been umbrellaed under the pianist’s name since his 2004 passing. McBride’s and Green’s shared performance will make, in Williams’ words, a “joyful noise,” or, as he often said, making music is “serious fun.”