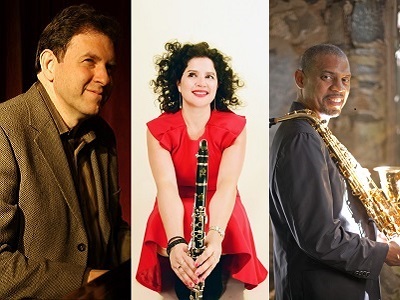 We couldn’t think of a better way to close out our Silver Anniversary Season then to ask three of our favorite musicians, each an intermittent “We Always Swing”® Jazz Series visitor, to take a leap of faith and do something musically that they have never tried previously. Each a good friend of the other, they return to “scene of the crime,” the home of Drs. Sher & Tellerman.
It was there where pianist Bruce Barth made separate appearances, first with Steve Wilson in 2009, which turned into the critically acclaimed, nationally distributed Jazz Series-produced HOME: Live in Columbia, Missouri CD (WASJS-1002), and subsequently six years later in 2015, with Anat Cohen.
We now bring all three accomplished musicians together for what promises to be a very special collaboration between three outstanding performers.
Thanks to Barbara Tellerman and Allyn Sher, we return to the most-intimate, 60-seat setting for two shows on the same day. Admission will be offered first to those who purchase Season Tickets (all 12 concerts). Should any space remain available after that, they will be made available on a first-come, first-served basis. Complimentary beverages and Hors d’oeuvres will proceed each of the two performances.