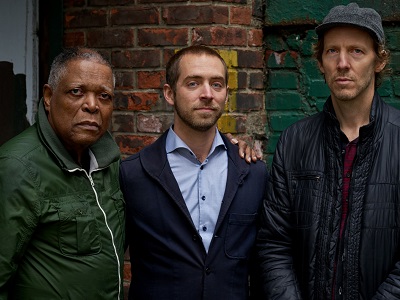 One of jazz’s most treasured tenets is having the ability to pay close attention to all that has been laid out ahead of when you entered the fray; equally important is possessing the ability to deliver fresh-sounding, new music. Additionally, one of the joys of jazz is making the music cut across multiple generations.
Pianist Aaron Parks’ Trio posseses both traits – and embraces them, doing so with panache. Parks, 35, is surely one of the more forward-thinking pianists of the day. A precocious youth, the pianist hails from Seattle and at 14 he enrolled in an early entrance degree program at the University of Washington. Stints with Terence Blanchard, as a co-leader of James Farm, which includes Joshua Redman, are but two of his many credits, having released 10 recordings as a leader.
Meanwhile, bassist Ben Street, who is from Maine originally, has worked with everyone from Danilo Perez – who he appeared with on another “We Always Swing”® Jazz Series occasion – to elders such as Sam Rivers. As for drummer Billy Hart, his history extends back to the late 1950s/early 1960s. A true master percussionist with his own particular sound, Hart’s only other Jazz Series appearance came in 2002 as a member of bassist Ray Drummond’s Excursion Band. On the cusp of 80, understandably, and not surprisingly, Hart’s knowledge of and his membership within jazz history digs deeply into the tradition, while he simultaneously and unflinchingly looks toward the future.
Together, the three musicians here both engage the audience as well as enthrall it.