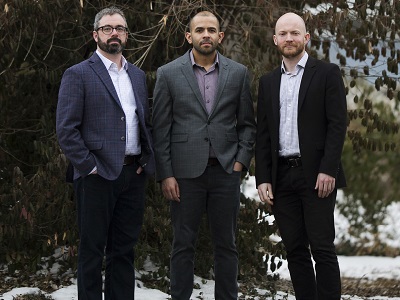 Incorporated into the “We Always Swing”® Jazz Series Silver Anniversary Season are a number of Special Events. Tonight’s world premiere features {Trés} with Special Guest Miguel Zenón.
{Trés} began as a collaborative project between José Antonio Zayas Cabán and Colin Young, with the purpose of creating transcriptions for a two-saxophone-and-piano ensemble. The ensemble, which also includes pianist Casey Rafn, has now performed works by a wide range of composers, with concerts taking place in Central America, Caribbean and throughout the United States.
Recently, the trio finished a national tour titled “A Tribute to Puerto Rico,” devoted in part to help raise funds for and awareness about the island’s ongoing plight and its attempt to recover from Hurricanes Irma’s and María’s devastation. Rewarded for their dedication, the group has now been invited to conduct a multi-week residency in Puerto Rico. Through collaborations with composers such as tonight’s special guest, MacArthur and Guggenheim Award recipient Miguel Zenón, and Dublin, Ireland-based Amanda Feery, {Trés} will have the opportunity go to Puerto Rico to present free concert programs to low income communities throughout the island.
This concert features {Trés} with Special Guest Zenón as a third saxophonist – performing the world premiere of his El País Invisible.