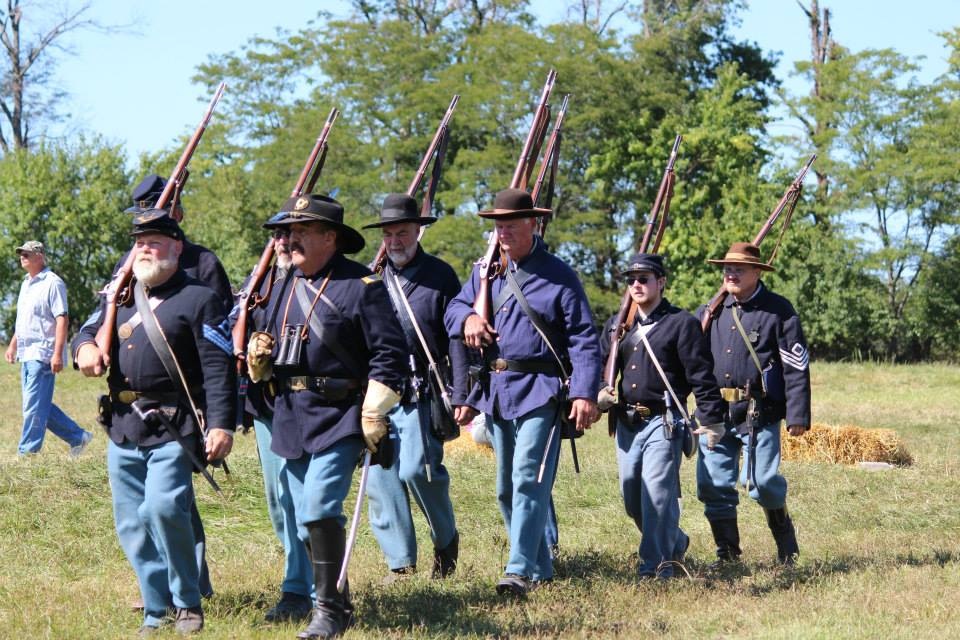 On September 27, 1864 Captain William “Bloody Bill” Anderson and about eighty men rode into Centralia, Missouri in search of the whereabouts of Federal troops. The search soon turned to looting and robbing fueled by liquor. A train arriving from the east was robbed and twenty-three Federal soldiers were taken off and all but one was shot. Anderson and his men returned to their camp three and a half miles to the southeast.

By mid-afternoon Major A. V. E. Johnston and 155 Federal Mounted Infantry arrived in Centralia. Johnston became outraged upon seeing the murdered Federal soldiers still lying on the ground. Johnston vowed to hunt down Anderson and his men even though locals informed him that he was outnumbered three to one. Anderson, upon learning of the arrival of the Federal troops in Centralia, sent a small number of scouts to lure Johnston and his green recruits into an ambush.

Johnston left thirty-five of his men in Centralia and pursued Anderson’s decoys to their encampment. Upon arriving, he observed about eighty men at the bottom of a hill with a wooded area to their back.

Since Johnston’s men were armed with single shot muzzle loader Enfields, he ordered every fifth man to hold four horses so the other soldiers could dismount and take the line. Seeing the Federals dismount, Anderson gave the command to attack. Anderson’s men riding low on their horses and armed with six-shooters rode straight into the Federal line.

After the initial engagement another one hundred of Anderson’s mounted men attacked from both the left and right flank. The battle lasted less then three minutes. Some of the Federals tried to flee by foot or horse with most being gunned down by Anderson’s men. One hundred and twenty-two men along with Major Johnston were killed that day.

According to legend a young soldier by the name of Jesse James engaged and killed Johnston. It is recorded  that Anderson lost only three men that day.