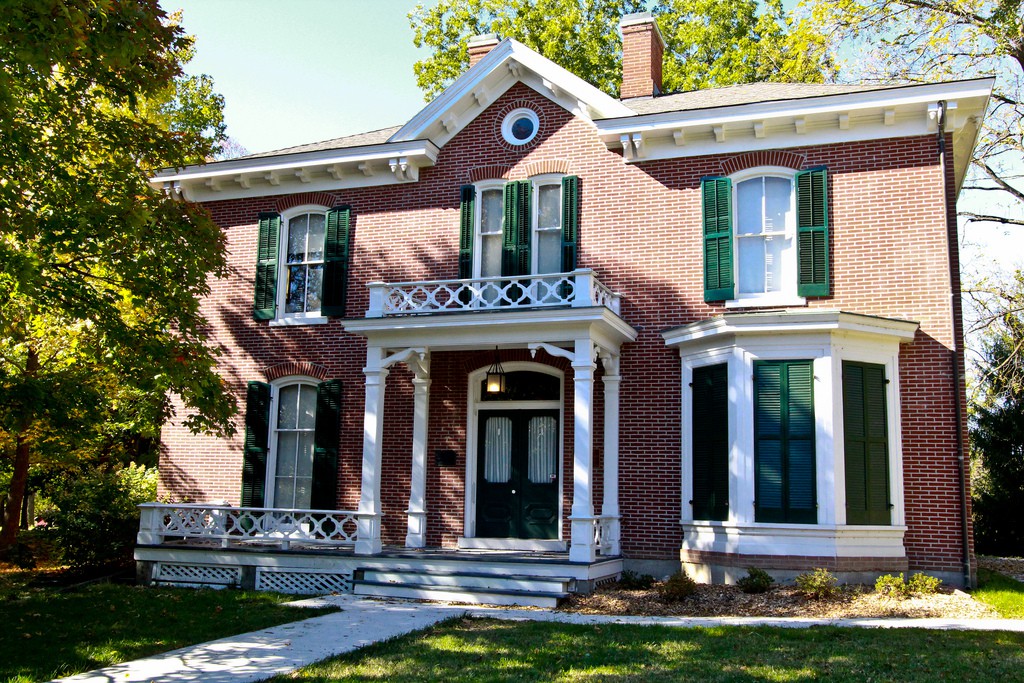 Boone Junction is a collection of historic buildings relocated to Columbia’s Nifong Park. The Village at Boone Junction is open April 1 through October 30 for tours of four or more visitors by appointment. Admission is $5 per person for a guided tour of the Village and admission to the Museum and Galleries. Call the Boone County Museum and Galleries at 573-443-8936 for details or to more information.

Furnished with authentic period collectibles and artifacts necessary to prosper in frontier life, the Gordon-Collins Log Cabin was built ca. 1822 by David Gordon, a settler from Kentucky.  The cabin served as the family’s temporary quarters while a larger house was built and served later as slave quarters and the home of hired day laborers.  Inside the cabin, visitors can see the tools needed to build and sustain a life in the new frontier. Homemaking tools include looms, spinning wheels, candle molds and cookware ~ all needed to create the basics of life in a rustic environment.

A replica of a turn-of-the-century Boone County landmark, the Easley Store offers visitors a window into another time. Stocked with typical items needed for trade and sale 100 years ago, the store even features a small post office. The Easley family provided services in the Southern Boone County community for one hundred years. Built originally in 1890 by William Greene Easley on the banks of the Missouri River in the southwest part of the county, the store has been reconstructed at Boone Junction using historical photographs, detailed interviews, and portions of the original building.

Built on Garth Street in Columbia around 1910 by Luther McQuitty, an African-American contractor and realtor in Boone County, this house features the vernacular “Shotgun” style of architecture. Shotgun houses were typically long and narrow, usually three or four rooms, with doors connecting one room to the next and no hallway. It was said that a shot fired from a shotgun at the front door could reach the back door without ever touching a wall. The McQuitty shotgun house has front and back doors in the center of the ends of the house but the connecting doors between rooms are along the right-hand side of the house. It is known to be one of the few surviving houses of this design in Columbia.

Home of the historic rivercraft Nikawa, River Horse Pavilion showcases one of only a few vessels to cross the continent on inland waterways since the Lewis and Clark Corps of Discovery Expedition in 1804–06. Boone County resident and author William “Least Heat-Moon” Trogdon piloted Nikawa across American waterways and donated the boat to BCHS in 1995. He also contributed artifacts and documents relating to this historic voyage. Open at all times for self-guided tours, the River-Horse Pavilion displays maps and routes traveled during Trogdon’s voyage across America, and celebrates the spirit of adventure of the historic Missouri River.

The Late-Victorian-Era Ryland Farm House is a classic reflection of the Eastlake influence on design during the late 1800s. Elements of nature are reflected in the trim, including a sunrise motif in the gable, bird’s-eye trim around doors and windows, and branches and leaf carvings in the doors. Originally located on north Highway 63 near Sturgeon, the house was built ca. 1890 and was a typical rural dwelling for a farm owner of modest means.

Listed on the National Historic Register, Maplewood House was built in 1877 by Slater Ensor Lenoir and his wife Margaret Bradford Lenoir, both of whom were members of Boone County pioneer families. The farmstead was called Maplewood because it was located in a grove of large sugar maple trees. Only four people lived in the home; the Lenoirs, their daughter Lavinia, and later Lavinia’s husband, Dr. Frank G. Nifong.