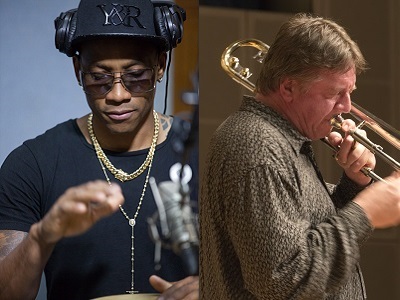 It’s performances like this that help make our 25th Anniversary Season both exceptional and special. It’s rare we invite an artist to return for two consecutive seasons, but we – as well as the crowd – were so taken with percussionist-vocalist Pedrito Martinez’s output last season that we decided he should be part of our year-long celebration.
This time around, the master percussionist arrives with his working band. Joining Martinez will be the rest of his GRAMMY-nominated group as they roll through a series of Cuban/Latin and other original compositions. That’s special in its own right, but we wanted to add to the mix, so we approached trombonist Conrad Herwig, his former boss and 4-TIME GRAMMY-nominee as the Latin Side All-Stars leader, to join him as a Special Guest.
Not only does this mark another “first” in the jazz world, but the performance also has the potential to turn into an electric and unforgettable Annual Dr. Carlos Perez-Mesa Memorial Concert – what with the long-time chemistry between Herwig and Martinez that spans more than two decades.